A TEDx Talk in Shanghai later this month will feature a session by Surrey’s Professor Ben Murdin on how electrons can be made to go back in time. 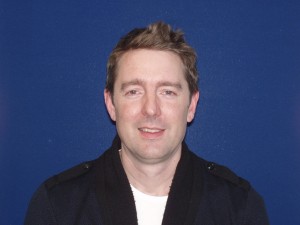 The TEDx talk, due to take place in Shanghai’s Fuxing Park Expo exhibition hall on 22 April, is themed on ‘Back to the Future’. The famous film trilogy, where the main character travels back in time to put things right for the future, raises important questions about whether the future is determined by destiny or free will – a topic that will be tackled by a diverse range of international speakers from industry and academia.

During his talk, Professor Murdin will highlight the advances the University is making in the field of quantum technology, which is based on manipulating individual electrons to behave and interact in a certain way.

He explains: “My talk will focus on how old technology is getting a new life. Silicon chips have been used for electronic devices since the late ‘50s, and the challenge was to get crystals of higher and higher purity, but then to create deliberate defects and impurities to control the flow of electrical signals through the chip.

“Today, in our quest for quantum technology, we need to understand and control the quantum motion of electrons as they orbit the defects. The simplest, but also one of the weirdest of these quantum effects we can now produce is ‘time reversal’, where time runs backwards for the electrons – and you trigger it with a flash of light, just like Marty McFly in the ‘Back to the Future’ movie.”

The global TEDx programme is designed to help communities, organisations and individuals to spark conversation and connection through local ‘TED-like’ experiences. TED (Technology, Entertainment, Design) is a non-profit organisation which posts talks online under the slogan ‘ideas worth spreading’.

Explore our programmes in Physics, including our degrees in Physics with Quantum Technologies.

Prof. Ben Murdin gave an invited talk at the American Physical Society March meeting 2017 in New Orleans last week – a conference attended by 10,000 physicists. The talk was in one of the plenary halls in a session to commemorate (and give a modern update on) the work of Nobel Laureate Walter Kohn. Ben talked about Kohn’s theory of the atomic wavefunctions and energy levels for donors in silicon, and how they are now being used for quantum information qubits. 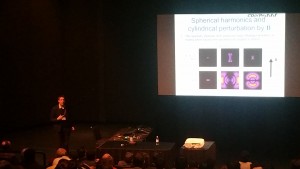 A consortium of UK researchers and researchers of the FELIX Laboratory have successfully negotiated renewal of a long-standing collaboration with Radboud University, Nijmegen, for research at the FELIX laser laboratory. The UK national science foundation (EPSRC) will fund expert support and access to beam lines at the Dutch facility, a unique source of light spanning from the infrared to the microwaves. The free electron laser, a machine that was originally built with a combination of a Dutch accelerator and a British “wiggler” (the set of magnets that force the electrons from the accelerator to emit laser light), is much brighter and produces much shorter, broadly tunable infrared and THz pulses than anything currently available in the UK. British researchers are performing experiments ranging from silicon quantum technologies, to astrophysical molecular spectroscopy and to catalysis there. The announcement for the renewal of the EPSRC Mid-Range Facility at FELIX follows hard on the heels of the opening of new one at the same location for research on high magnetic fields. Prof Ben Murdin from the University of Surrey, the UK spokesman at FELIX, said “The photons produced in Nijmegen have allowed us to look at far more complex motions at the quantum level than we would be able to by ourselves, and I am looking forwards to the really exciting new opportunities provided by the unique combination of both the persistent high magnetic fields and the FELIX lasers. We will be able to watch electrons in great detail as they move through materials with the FELIX lasers and have in addition the possibility to control the motion in new ways with the magnets.” Britta Redlich, the FELIX facility manager at Radboud University said “At FELIX we are delighted to continue this very successful, long-term collaboration with EPSRC. It is wonderful to see that British scientists are looking outwards and able to work with the best available tools wherever they may be, Brexit or not.” 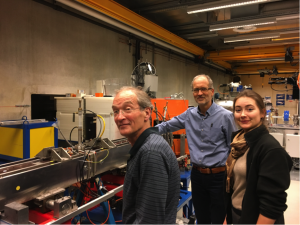 Part of the University’s strategic partnership with the National Physical Laboratory (NPL), the joint Hyper Terahertz Facility will enable researchers to push the barriers of quantum technology. 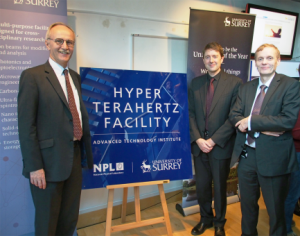 The Facility was opened on 20th November 2015 by Dean of the Faculty of Engineering and Physical Sciences, Professor Jonathan Seville and Dr Robin Hart, NPL’s Director of Programmes, in a ceremony attended by researchers from NPL, the University’s ATI (Advanced Technology Institute), RAL (Rutherford Appleton Laboratory), and other leading research institutions and universities. These included UCL (University College London) which is a key collaborator with Surrey in the ADDRFSS (Atomically Deterministic Doping and Readout For Semiconductor Solotronics) project (COMPASSS follow-up).

Following a welcome by Surrey’s Head of Photonics Professor Ben Murdin, Professor Seville and Dr Hart, attendees listened to addresses by Dr Mira Naftaly of NPL, and Steve Chick, who is undertaking a PhD in Photonics at Surrey. They were then invited to take a tour of the new facility.

The Hyper Terahertz Facility, which is located in the ATI, is the first joint laboratory to be opened under the strategic partnership signed between Surrey and NPL in July 2014. The first facility of its kind in the UK, it will enable experiments in the terahertz spectrum – a part of the electromagnetic spectrum that is not well used currently – which researchers believe holds the key to a number of breakthroughs in quantum technology.

The primary focus will be investigating how the short, high power pulses of the terahertz spectrum can be used to control the ability of atoms to be in two places at once, which is a crucial requirement in the advance of quantum computing. Quantum computers are able to make calculations much more rapidly than standard computers and therefore have the potential for huge improvements across many industries.

The Hyper Terahertz Facility will also enable researchers to develop transistors at the ultimate limits of nanotechnology, where a single atom controls the signal flow. This technology could have valuable applications in biomedical research, for example, by helping researchers to understand how receptors within the body open up to receive drugs.

Professor Jonathan Seville commented, “The opening of this Facility at Surrey has been achieved through a close collaboration between the two groups, with NPL’s Time, Quantum and Electromagnetics division contributing its expert knowledge in THz generation, and Surrey providing the necessary infrastructure and driving the research in silicon single atom quantum technology. This is a great demonstration of our evolving partnership and will be an excellent platform for research into the next generation of electronics.”

Dr Rhys Lewis, head of the Time, Quantum and Electromagnetics division at NPL said, “This is a very exciting extension of our already fruitful collaboration with the University of Surrey in quantum and electromagnetic technologies. The ability to work together in the same facility will doubtless lead to additional successes which wouldn’t have happened otherwise. We look forward to extending this model to other areas of our work.”

A second joint Surrey-NPL laboratory, which will focus on high frequency microwave measurements, is due to open at the University in early 2016. NPL and Surrey are also planning to collaborate more closely on 5G communications technologies.

The official news feature can be found here

Details to be followed

Surrey hosted the three-day workshop in partnership with the South East Physics Network (SEPnet), the Engineering and Physical Sciences Research Council (EPSRC) and the University of Sussex.

The symposium comprised of various talks and workshops, bringing in external speakers from institutions such as the National Physical Laboratory (NPL), IBM, University College London (UCL) and the University of Oxford. Oxford Instruments also sponsored the poster session and drinks reception.

Dr Steven Clowes, Surrey’s Advanced Technology Institute (ATI) postgraduate research director, said, “I’m always looking at ways in which we can enhance our training provision for our PhD students. The original idea for the winter school originated from my involvement in the organisation of EU-funded Erasmus summer schools in Crete over the past two years. I discussed the idea with the University of Surrey’s Researcher Development Programme, which then led to successful funding from SEPnet and the EPSRC. The event went extremely well. The talks were fantastic, and there was a really good energy around the place – particularly during the poster session. The residential setting of the winter school gave students the opportunity to network with fellow researchers across the SEPnet universities, and have valuable discussions with academics. It’s an exciting time for quantum technologies, as the pace of scientific advance is accelerating and the potential impact of these technologies is enormous. Our early career researchers who attended the winter school will have some very exciting times ahead.”

Surrey PhD student Robert Simmons said, “The winter school was a great opportunity to learn about the current state of quantum technologies. It was especially helpful having speakers from different fields and schools of thought to demonstrate the many different approaches involved when developing novel technologies. […] It was a real benefit to everybody to be able to have face-time with academics and industrial representatives outside of the talks […] to discuss ideas in a less formal environment.”

The group’s Nature Communications paper describing the coherent control of orbital states and with optical and electrical detection, has picked up press coverage here and here

The aim of this meeting is to bring together researchers interested in silicon qubits. Topics covered will include experimental and theoretical approaches to quantum coherent control, spin resonance, atomic scale lithography, device fabrication and electronic transport.

20th September 2013, at the University of Surrey