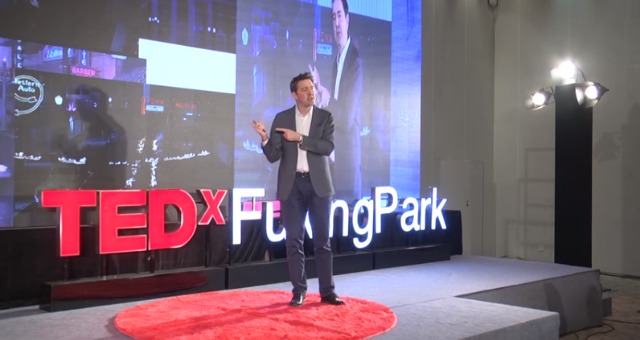 The TEDx talk, which took place in Shanghai’s Fuxing Park Expo exhibition hall on 22 April, was themed on ‘Back to the Future’. The famous film trilogy, where the main character travels back in time to put things right for the future, raises important questions about whether the future is determined by destiny or free will – a topic that was tackled at the TEDx talk by a diverse range of international speakers from industry and academia.

During his talk, Professor Murdin highlighted the advances the University is making in the field of quantum technology, which is based on manipulating individual electrons to behave and interact in a certain way.

Speaking before the talk, Ben explained: “My talk will focus on how old technology is getting a new life. Silicon chips have been used for electronic devices since the late ‘50s, and the challenge was to get crystals of higher and higher purity, but then to create deliberate defects and impurities to control the flow of electrical signals through the chip.

“Today, in our quest for quantum technology, we need to understand and control the quantum motion of electrons as they orbit the defects. The simplest, but also one of the weirdest of these quantum effects we can now produce is ‘time reversal’, where time runs backwards for the electrons – and you trigger it with a flash of light, just like Marty McFly in the ‘Back to the Future’ movie.”

The TEDx talk was a great success, with an audience of over 400 gathered to delve into the world of quantum technology and satisfy their curiosity about time travel. The event was also live-streamed.

Ben commented: “It was great to be able to visit Shanghai and some scientist colleagues to see how we can collaborate, because China is so dynamic and fast-moving. It was terrific to see so many people interested in coming to a science talk by a physicist. I hope I captured the imagination by showing how useful “time travel” is, even if it’s only possible for very tiny objects and for very short times.

“Giving the talk and meeting people at the TEDx conference gave me inspiration for how to teach the physics better to the students back home at the University of Surrey, so I’m looking forward to next semester!”

The global TEDx programme is designed to help communities, organisations and individuals to spark conversation and connection through local ‘TED-like’ experiences. TED (Technology, Entertainment, Design) is a non-profit organisation which posts talks online under the slogan ‘ideas worth spreading’.

Explore our programmes in Physics, including our degrees in Physics with Quantum Technologies.