Newly published research from the collaboration shows that we can control the shape and size of phosphorous atoms in the silicon crystal (Si:P). Our international team studied the structure of Si:P orbitals under magnetic fields, where simple theoretical models tell us that the electron should wiggle and rotate around the nucleus. We created superpositions between three states using the free-electron laser FELIX, and studied how the Si:P absorbed different amounts of light at different times. This told us something about how the atoms’ behaviour related to the simple theoretical models. 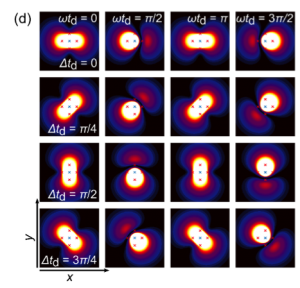 The simple theoretical picture of atoms dancing (“precession”). If we assume that the P atom behaves exactly like hydrogen (which is very simple), then we can predict how the wavefunction will vary over time after we shine bright THz light on it. In the diagram, time reads like a page: left-right and then in rows top-bottom. The time intervals left-right are very short, whereas the time between lines is a lot longer.

We then noticed that the simple theoretical models didn’t explain very well why they should apply to complicated systems such as Si:P. So we worked out a theoretical explanation for our data which captured lots more of the detail, which is specific to silicon and makes everything more complicated. We showed that, despite the complicated formulation, it could be quite easily compacted into a set of equations which behave much like the simpler theoretical models which we started with. That means that we have a simple concept for why the atoms dance about, and a very strong link to the real underlying physics. 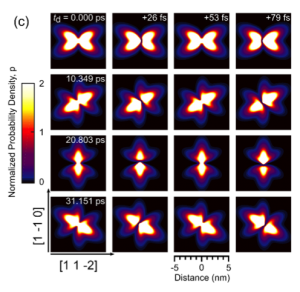 Our more complicated theoretical work shows that, although the fine details of the wavefunction are different, the same principle of precession applies to our material. We have essentially shown that we can understand what P atoms in silicon will do by assuming they are hydrogen.

Our most interesting result was when we plotted the shape of the wavefunctions, and how they evolve over time. We found that when they rotate around, there are places near the atom where the probability of finding the electron goes up and down over time. That means that if we put other atoms nearby, we can control which nearby atoms our qubit “sees” at any given time. We came up with a new suggestion for how to take advantage of this so that future quantum computers made with silicon could be more robust to random errors – a very important milestone in the development of and quantum computer! 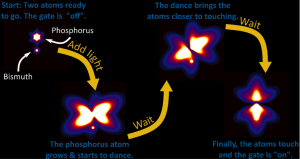 How to use our new idea. Start off with two atoms sufficiently far apart that they don’t touch, and then add light at the right wavelength that the P atom is excited into a three-state superposition. Then wait until the atoms overlap, and the gate is switched on. After a further wait (not pictured), the gate will switch off again.

Finally, we remembered the old adage of Richard Feynman that if you can’t explain a concept to an undergraduate then you don’t understand it well enough. So we took on board a project student, Charlie, to test this out – and from our explanations he produced a series of animations showing how the wavefunctions dance around in 3D space.