This project aims to fabricate a single atom silicon device designed to take advantage of the quantum nature of electrons. We will characterize the device and then generalize it. The picture shows a schematic of such a device, where “trimers” of impurity atoms are buried within a silicon crystal. The impurities are close enough so that the electrons orbiting them magnetically feel the presence of the adjacent impurities, and the strength of this interaction is controlled with terahertz speed from outside by combinations of electrical voltages, THz light beams and microwave pulses. 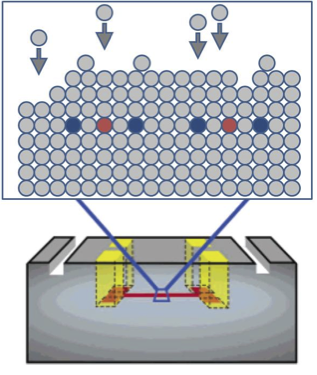 Image: The picture shows a schematic of such a device, where “trimers” of impurity atoms are buried within a silicon crystal.

We shall develop a European capacity for atom-by-atom construction and design of Si-based devices. Standard silicon computer and memory chips are made by implanting very small patches of impurities (“dopants”) by firing them in from an accelerator, which means that the dopant atoms end up slightly randomised. The atomic scale construction will circumvent this, resulting in the possibility, for example, of making genuinely identical transistors on the nanoscale.

The exploitation of spin in silicon, even on a classical level, will yield new paradigms for spintronics. Today, spintronic devices are essentially only used for memory functions, and they rely on materials more exotic than silicon. Linked trimers of atoms will revolutionize the field of quantum magnetism – producing spintronic information processing devices. The control of the atomic spins and the interactions between will create a new market for the associated devices.

The combined use of coherent THz and microwave radiation will create a new two- colour spectroscopy whose initial applications will be in condensed matter science and device engineering. We expect the normal progression followed, as for NMR, and to lead to much higher levels of application in molecular biology.

The central idea for the proposed quantum computing scheme comes from a proposal by Stoneham, Fisher and Greenland: 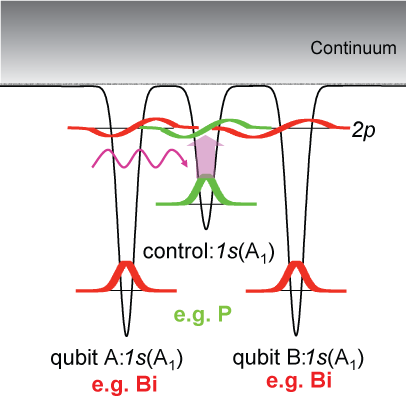 Imaging at the Atomic Scale

To build precise arrangements of impurity atoms in silicon and understand their quantum properties, we need to image and probe these structures at nanometer length scales. To do this, we utilise scanning tunnelling microscopy (STM), a technique that is capable of resolving individual atoms on surfaces. For example, the image below shows the effect that an single antimony (Sb) atom has on the electronic states of the dimer rows of the Si(001) surface. Furthermore, STM can be used to manipulate surfaces to create structures with atomic-scale precision. For this project, the STM can be used to preform atomic-scale lithography, which we employ to create templates for the precise arrangements of phosphorous atoms on the silicon surfaces. These structures are encased in a protecting layer of silicon and then accessed with additional electrical contacts, also made using the STM. Such devices can be used for measurements in a variety of facilities, including those at FELIX. 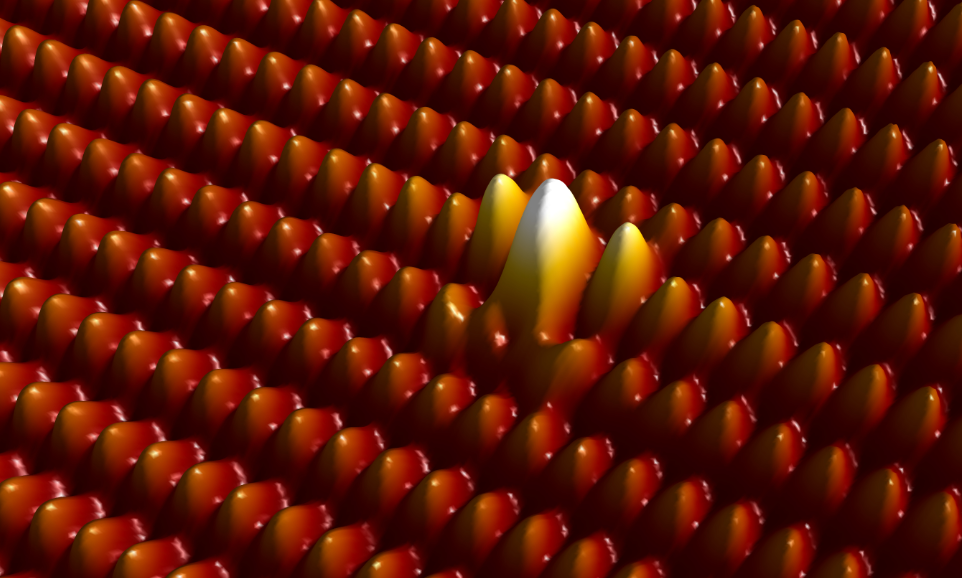 Why are you doing this?

Next to iron and ice, silicon is the most important inorganic crystalline solid because of the tremendous ability to control electrical conduction via chemical and electrical means. The associated devices – most notably the field-effect transistor – can all be understood using only the semi-classical band theory of solids. There are currently no IT technologies that utilise the ability of electrons to be in two states at once. This ability is encountered regularly in medical physics because it is the effect that makes MRI possible. We envisage devices where “quantum information” – where electrons represent both a 1 and a 0 at the same time – can be transferred along chains of impurities in silicon, manipulated, and read out electrically. This requires control of quantum coherence in semiconductor nanostructures where many identical units can be coupled and electrically contacted.

Where are you doing this?

The project is a partnership between The Advanced Technology Institute at the University of Surrey, The London Centre for Nanotechnology at University College London, and the FELIX facility at Radboud University Nijmegen in the Netherlands.

How will this affect me?

Quantum computing has the potential to calculate much more quickly some kinds of things that would be impossible with standard computers. Because the subject is so new there have not been a great number of specific programs written, but the main example is in information security. Quantum computing will enable cracking of standard codes, but will also be able to produce uncrackable codes.

More about the projects